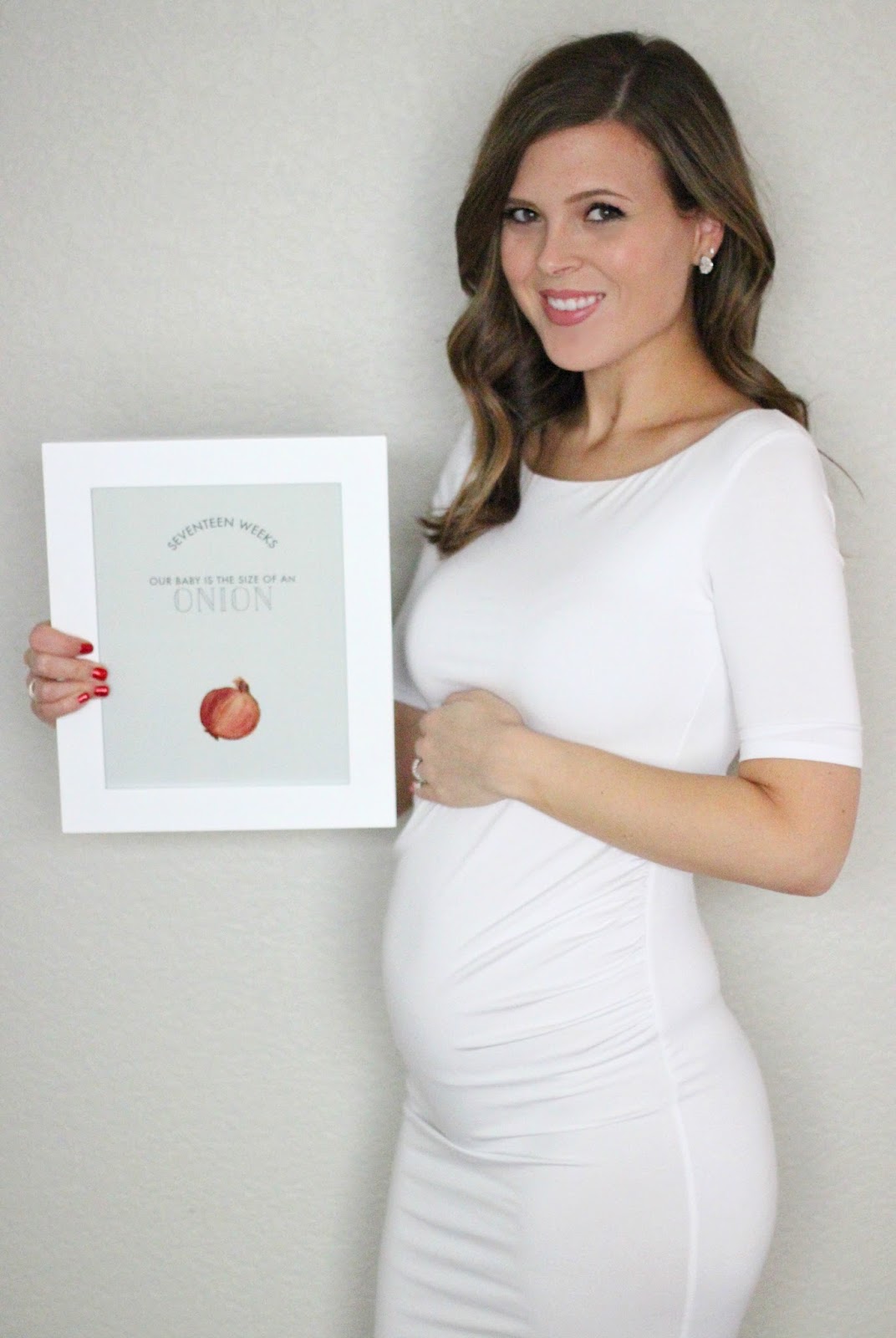 Colton and I would like to thank you all so much for all of your kind words regarding our news about Baby Rearick! Sharing the news has started to make it feel more real, making it all the more exciting. We are just feeling so blessed and happy and can’t wait to meet our little one. May can’t come soon enough!

Today, I thought I’d share a little bit more about the first 18 weeks of pregnancy. I plan to keep my blog predominately focused on fashion but am just so excited to finally share a little bit after keeping such a big secret for 17 weeks! I’ll probably be sharing pregnancy updates once a month or so after this.

When we found out: September 1st


How we found out: I was feeling extra hormonal/emotional during what I thought was “that time of the month” and I noticed my breasts felt a little sore which was unusual. Colton and I were on the couch watching X-Factor and I just got the overwhelming feeling that I needed to take a pregnancy test. I had one in the bathroom from a few months prior and got up to take it without telling him. I waited the directed three minutes and was completely shocked when two lines appeared to show that I was pregnant. Colton was planning to meet up with a friend for a drink an hour later, so I was quickly trying to plan a cute way to tell him while he was gone. I went back out to the couch and tried to remain calm so that I could wait to tell him when he got back from meeting his friend. Five minutes later, I ran back to the bathroom and grabbed the test and came out to the couch with it yelling “WHAT DOES THIS SAY?!” Clearly, I was still in shock, lol. He was also really surprised but said he had a feeling that I could be based on how emotional I’d been the past few days. We immediately went to CVS to buy more pregnancy tests and I proceeded to take five more. We were both so excited but really nervous leading up to our first ultrasound. All we wanted was to see the baby’s heartbeat (it’s too early to hear it at the first one) and when we did, it finally felt real. It was also the most amazing thing ever. Getting to see and then hear the baby’s heartbeat and getting to see the baby during the ultrasounds have been the most exciting parts of pregnancy for me so far.

How we told our families: I first want to say that keeping it a secret from them was SO hard! We wanted to wait until our first ultrasound to see the heartbeat before we told anyone just to be safe. My sister and her husband actually found out the day after we did, we hadn’t planned on telling them but my brother-in-law jokingly said something about Colton and I having kids and the look on my face pretty much gave it away. I’m so glad we ended up “telling” them (sort of, lol) because it was so nice that we at least each had someone to talk to about it besides each other. Hands down, the hardest part was keeping it a secret from my mom during my sister’s bachelorette party — I share more about that in the section about food aversions below. It ended up working out great though, because when we did tell her she was COMPLETELY surprised because she thought I’d been drinking the weekend prior at the bachelorette party. We got her reaction on video, which I’ll try to share in my next pregnancy post! We waited another three weeks to tell Colton’s parents so that we could tell them in person when they came down to Arizona for the Winter. It felt like an eternity waiting another three weeks because we’d already waited three weeks to tell my mom and step-dad. Both of his parents are so excited to be grandparents! After telling our immediate families, we waited to tell anyone else until after my sister’s wedding. We wanted my sister and her husband to have their moment before we started sharing the news. Luckily, keeping it a secret was a lot easier after we were able to tell our parents! We told my dad’s side of the family on Thanksgiving. We have a tradition of going around the table and saying what we’re thankful for, so when it was my turn I said I was thankful to be adding a new member to the family in 2017. As I mentioned in the last post, we ended up telling the rest of our family and friends that didn’t know yet by sending out Christmas cards announcing that we’re having a baby.


Gender: We have our ultrasound next week! We’re debating waiting until Christmas morning to actually find out, but we’ll see if I can make it that long without knowing beforehand, lol. We will be completely happy either way, but I will say we both have a strong feeling on what gender we think the baby will be.


Movement: Not yet but I can’t wait!

Symptoms: I’m feeling amazing! Other than waking up a few times throughout the night to use the restroom and having pregnancy acne, I haven’t really felt any symptoms in the second trimester. I was exhausted and nauseous throughout the first trimester but started feeling better around 13 weeks. The hardest part for me was having no energy for a good six weeks. I pretty much wanted to just sleep and/or lay on the couch at all times. Thankfully, my energy is back and I’m really feeling like myself again. Overall, I’m just feeling so blessed and grateful to be experiencing the miracle of pregnancy and don’t want to take any of it for granted.


What I Miss: Deli meat! I can’t wait to have a Turkey Tom from Jimmy John’s. I know you can heat deli meat up to eat it, but that doesn’t sound appealing. Other than that, I’m feeling really great and loving being pregnant so there’s not much to miss. Oh, and surprisingly I don’t even miss wine!

Food cravings: I haven’t had any major cravings for a few weeks! During the first trimester, pretty much all I wanted to eat was bean and cheese burritos and Vietnamese food — this dish in particular. Oh, and refrigerated (super cold) sour candy! My favorites are Sour Patch Kids (the original) and Sour Punch. I’ve tried a few others like Sour LifeSaver Gummies and Sour Patch Kids Watermelon but they weren’t sour enough. Other than that, I just wanted really basic foods, especially things I loved as a kid like grilled cheese sandwiches and spaghettios. For the record, all of these things still sound amazing but I’m not having those extreme cravings where if I don’t eat said item in the next two hours I’m going to go crazy. Ha! Oh, and the cravings are REAL. I consider myself a pretty healthy eater, so I didn’t think I’d have a problem resisting cravings during pregnancy….Boy, was I wrong! My appetite also seemed to increase overnight. Throughout the first trimester, I would start to get nauseous if I didn’t eat something every two hours.


Food aversions: MUSHROOMS! A few weeks after finding out I was pregnant, I hosted my sister’s bachelorette party in San Diego. At that point, the only people that knew besides Colton and I were my sister and her (now) husband. I was so stressed about having people find out while we were there, especially because my mom was there and I really didn’t want her to find out that way. Colton and I wanted to be able to tell our parents together and I wanted the focus of the weekend to be entirely on my sister. Luckily, my sister was a huge help when it came to making me fake drinks or making sure the bartender knew to secretly make mine a virgin. At one of the bars we went to, the waitress knew I was pregnant and the owner bought us all a round of shots. I was nervous about how she was going to handle that because I knew it would be extremely obvious if she brought everyone but me a shot. They were root beer float shots and she ended up bringing me one but mine looked a lot darker than everyone else’s because there was no liquor in it. I nervously shot mine back as soon as she brought them to the table and one of my sister’s friends couldn’t believe how quickly I’d downed it. Little did she know it was just root beer, lol. On the second night of the trip, we all went out to a nice Italian dinner and I ordered a mushroom truffle pizza which sounded delicious at the time. I was still pretty early in my pregnancy and hadn’t experienced any aversions at that point. The second my pizza came out the smell of the mushrooms immediately made me nauseous. I had to force down a few bites because I didn’t want anyone to question why I couldn’t eat my pizza and now just the thought of mushrooms makes me sick. Before getting pregnant, I ate Raisin Bran with almond milk every morning but once the nausea hit, I no longer wanted that. Italian food and pizza also sounded awful during the first trimester. The only thing I’m still refusing to eat at this point is mushrooms!

And one last thing, I have to give a huge shoutout to my husband! From helping me get through all of my cravings and aversions in the first trimester to just being there for me through all of the crazy hormones and emotions. He was so good about making random things for dinner on a whim (and not getting frustrated when what sounded good at the time tasted awful resulting in a bowl of cereal for me), going on last minute runs to the grocery store, and always letting me pick where we went out to eat. I love keeping the house clean and when I was feeling exhausted he would keep up with all of the housework because he knew a messy house would drive me crazy, even though most of the mess was mine. (Sidenote: I know having a child means I’ll have to be okay with things being a little more messy. It just might take me a bit of time to adjust, lol.) The baby isn’t even here yet and he’s already been so helpful and understanding with everything. I feel very blessed to know that our baby will have such an amazing man as his or her daddy!

Sorry for the crazy long post and thanks so much for following along!