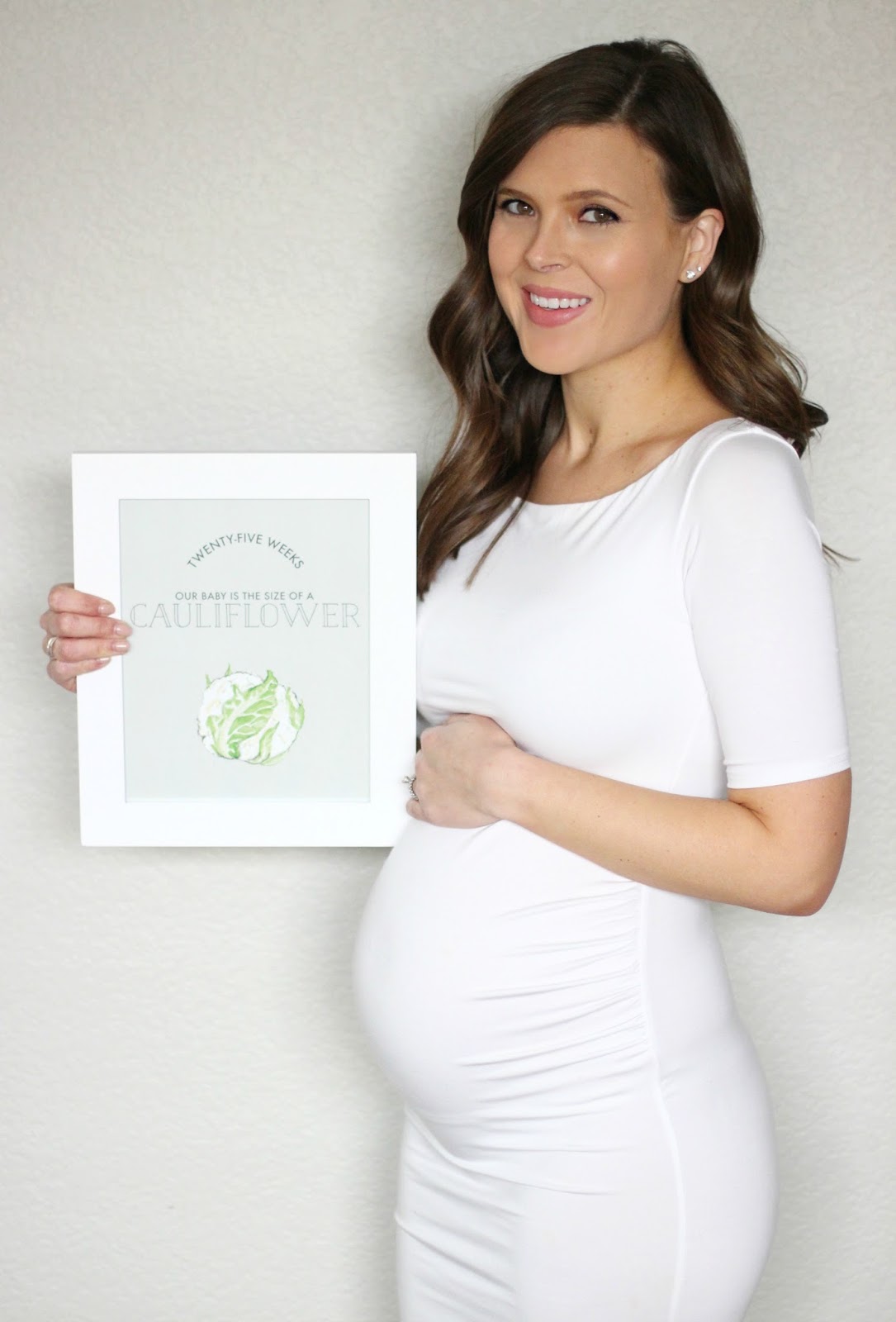 Gender: Girl! Colton and I both thought it was a boy the entire time, so we were completely shocked! We had our ultrasound on December 16th but asked the ultrasound tech to put the gender in an envelope for us to open together on Christmas morning. I drove myself crazy for nine days but waiting to find out made for the most special Christmas present ever. We waited another week to tell anyone because our families were going in and out of town during the holidays and we wanted to be able to tell them all together. We had a small gender reveal brunch with our parents, my grandparents, and siblings on New Year’s Eve. My grandpa put together a fun video from the morning which you can watch below. (A little background info before watching: We played darts with balloons and once three balloons were popped with the same color confetti it would reveal the gender but we decided to add a fun little twist to the end!)


Movement: Yes! I felt her kick for the first time at 20 weeks. I was told at my ultrasounds that I have an anterior placenta, so it can take a little longer to feel kicks. This just means that my placenta developed in the front side of my uterus putting a cushion between the baby and I. Colton and I were driving home from my grandma’s house on Christmas Eve when I felt her kick for the first time. I never felt anything like flutters or popcorn popping (a way some women describe the first kicks) and can only describe it to feel like a kick, lol. I had a slice of cheesecake that night, so we joked that she must love sweets like her mama to give me such a strong kick the first time. When I laid down in bed that night she kicked a few more times and Colton was even able to feel one! I mainly only felt her kicking when I would lay down for the first few weeks but now I’m feeling her constantly and I absolutely love it.

Symptoms: I’ve been having round ligament pains for the past few days. It’s a sharp pain that’s caused by the ligaments surrounding my uterus stretching. The only way I can describe the pain is like the cramps you get if you drink too much water and then go running. I can’t feel it when I’m sitting still or laying down, but getting up and moving around these past few days has been uncomfortable.


Belly Button: Innie but definitely getting smaller and smaller…the only part of me that’s shrinking right now. Ha!


Physical Changes: My bump is growing by the day! I also can’t believe how fast my hair and nails have grown since getting pregnant. I took prenatal vitamins for almost a year before we got pregnant and never noticed a difference, so it’s definitely just all the pregnancy hormones!

What I Miss: Cold deli meat, sushi, and a glass of chardonnay.

Food cravings: I’m not really having “cravings” anymore like I was in the first trimester. During the first 14 weeks, if I was craving something I absolutely had to have it IMMEDIATELY. I think a lot of it had to do with pretty much nothing sounding good then, so when something did actually sound good I needed to eat it. I’m trying to eat healthy 90% of the time now and the other 10% of the time I’m indulging in sweets and pizza. It’s weird that I’m loving pizza recently because it sounded awful during my first trimester.

What we’re most excited about: Obviously we’re most excited about meeting our baby in a few short months! Other than that, we’re excited about starting the process of putting together her nursery. So far we’ve ordered her crib, crib bedding, and a glider/ottoman for the nursery. Colton and his dad are installing a light fixture in her room this weekend and hopefully Colton will be painting it this weekend as well. It just depends on if we can decide on a color by then…who knew picking out a paint color would be so difficult?!


What we’re least excited about: I don’t think there’s anything we’re not excited about. I’m definitely feeling most overwhelmed by everything I feel like we still have left to do but am trying to just tackle one thing at a time so I don’t stress myself out too much.


Favorite Maternity Clothes: I’ve only purchased a few maternity items so far, as I’m trying to wear my regular clothes for as long as possible. I’ve found a few comfy basic maternity pieces that I’m loving and they’re all under $50. I just can’t justify spending too much money on something that I’m only going to wear for a few months.

I posted about these maternity jeans from Target on Instagram yesterday. They’re currently on sale for under $30 with code JEANS25. They run large (especially in the waist) so I highly recommend sizing down.

I also love these maternity jeans from H&M. I recommend sizing up one size in them.

I bought a few basic maternity tees and tanks from Target that I’ve been getting lots of wear out of. I love this tank (as seen here on Instagram) but the white is a little sheer, so I wear a nude cami underneath. I’ve also been wearing this v-neck tee non-stop.

Favorite Pregnancy Items:
One of the first things I needed early on in my pregnancy were some new bras. Let’s just say my boobs started growing a lot quicker than my bump did, lol. I was skeptical about buying this one because it’s one size fits all, but I read nothing but good things about it from a few other bloggers, so I decided to try it out. I’m so glad I did because this bra is seriously the most comfortable thing ever! And you can’t beat the price…it’s only $20! I’ve since bought two more and have been wearing them all day, everyday.

I bought the popular Snoogle pregnancy pillow but I use it more for lounging than I do sleeping. I’m used to sleeping with a feather down pillow, so I don’t like how firm the pillow is on my neck. I prefer a body pillow for between my legs at night but still like to use my Snoogle when I’m laying on the couch or watching TV.

My hair started to get really dry during the beginning of the second trimester and my hairdresser recommended this product. It has made such a huge difference! I just put a quarter-sized amount in before blowdrying my hair.

Definitely not a necessity, but I used Tan Towels as a fake tanner before getting pregnant. There were no definitive answers on whether or not they were safe to use during pregnancy so I switched to the St. Tropez Self Tan Express Bronzing Mousse. I love it because I can shower after three hours (rather than six) and unlike most self-tanners, it doesn’t have a strong smell.

My mom bought me this cozy cardigan (non-maternity) for Christmas and I’ve pretty much been living in it. It’s SO comfy and I love that I can still wear it after having the baby.

I still have a lot of jeans that fit me in the legs but are uncomfortable to button. The Bellaband has saved me a lot of money in maternity jeans because I’ve still been able to wear my regular jeans with it.